A Nice Sit Down 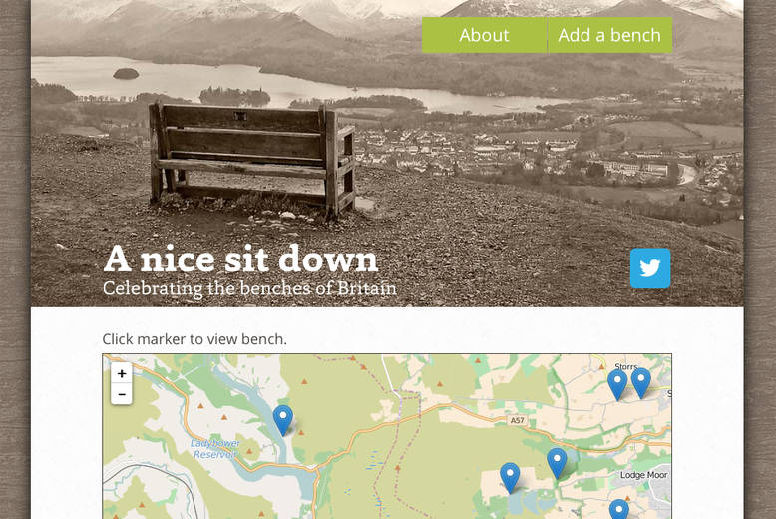 The benches are marked on an interactive map of the country. Click on a bench location marker to be taken to the bench’s page. It’s great.

There’s no log in and I’ve kept the amount of required information to a minimum. Error checking on the form is ‘live’ (errors are shown straight away, as the form is filled in, at the place where the error is).1

A preview page is shown so submitters can see how their entry is going to look and make any further changes before approving it.

But not painless enough – longitude and latitude

It’s a bit of a wasted effort making the form easy to use though because submitters have to enter the bench’s longitude and latitude.

It’s not hard, and there is a page of instructions,2 but it involves visiting an online map website,3 finding the bench on the map and cutting and pasting4 the location data into the form. Even if the bench is easy to find on the map – and often it isn’t – the process of adding a bench can take several minutes. I suspect this discourages people.5

I have looked it into using ‘geotags’ from photographs but it’s not straightforward.

Some cameras and phones include the longitude and latitude (geotags) of where a photograph was taken in its data. This information can be extracted by the website so it does not have to be added manually. This would make the process of adding a bench to the website much easier. However I don’t think this would be much use to most contributors. The most popular ‘camera’ by far – the iPhone6 – removes the geotag information when a photo is uploaded using a browser.7

I could still use geotagged photos from other devices. I could also load photographs from websites such as Flickr and Instagram, where photos are uploaded via an app and the geotag data is not removed, but then contributors would need an Instagram or Flickr account.

Technically none of this is too difficult. The hard part is making the process simple and robust. This would take a bit of work, would probably not benefit most users and complicate the process for many. As such, neither I nor my client think it’s worth doing at the moment.